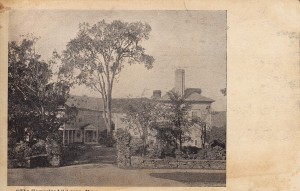 This small 1-story, wood-frame building was converted from a carriage house to a dwelling, year unknown. Since it has been adapted for residential use, with a few added features, it could be categorized as “Colonial Revival. It is sided with stucco, which may or may not be its original cladding. It has a hipped roof with wide overhanging eaves and a vent cupola. Roofing consists of asphalt shingles and standing seam metal. There is a brick interior chimney. The front facade, facing Yokun Avenue on the north, has five bays asymmetrically organized. A front gabled entrance porch is located at the far left edge. It has a standing seam metal roof with barrel-vaulted ceiling and is supported by two simple pillars. Metal side railings have been added. Beneath the porch roof and to the right of the front door is a set of two casement windows. The front door looks to have been replaced. Farther to the right on the front facade are two sets of three casement windows and two sets of two casement windows, from left to right. The rear facade is distinguished by two canted pavilions with hipped roofs. Between them is a gabled wall dormer. A broken-eave dormer with eave returns and a set of three casement windows is centered on the right side. The left (east) side has a small bump-out that has a hipped standing seam metal roof. The foundation is constructed of large rough-faced cut stones. Skylights have been added to the roof. Decorative window blinds are additions. A wood privacy fence runs along the east property line/Cliffwood Street right-of-way and turns the corner to run along Yokun Avenue up to the driveway entrance off Yokun. Another section of privacy fencing extends right from the right front corner of the building. Coniferous and deciduous shrubs also provide screening from the roadways. And there are specimen and ornamental trees in the small yard.