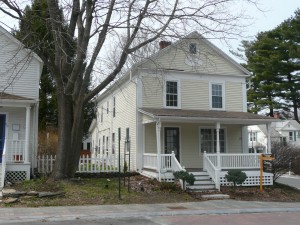 This Federal style building has two stories, an asphalt shingle roof and has been minimally altered. It is a 2-bay structure with a wood frame, pedimented front gable roof, and a brick center chimney. The attic level has an oval plaque sans decoration. The structure has slender corner boards and a short frieze.

A great number of these modest dwellings were moved or demolished in the late 19th and early 20th century to make way for more elaborate buildings.

The house was originally built on another site, and probably moved here sometime after 1850. Joseph Palmer owned the entire lot along Franklin St., from Church St. to Main St.; and he may have built this house on the Main St. frontage of his property. Palmer left the property to his granddaughter, Desire Palmer Mann, in 1838. After her death it was sold on behalf of her minor children in 1855 to Eliza Williams. Franklin Washburn purchased the lot in 1864. He subsequently sold it to Sidney Tillotson, who located his livery complex here. This house served for a time as a grain store, before being returned to use as a residence in the 1920’s.

The February 20, 1982 Form B notes “It is suspected that this house might have been moved from the corner of Main and Franklin. The house would then have to be built by Elijah Northrop in the early 1800’s.” This cannot be confirmed by map research done in 2011. If it is the building labeled “Mann” at the corner of Main and Franklin, on the 1854 Clark Map, it was moved to an interim location as it is not depicted either there or in its present site on the 1876 Beers Map. It is best to consider the Historic Name unknown since the original owner is obscure and so many changes occurred early on.

The property was acquired by John O. McSorley and John P. McSorley Jr. in 1979.