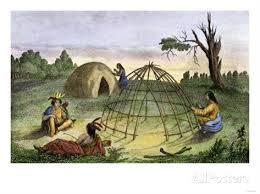 From their earliest explorations of North America, Europeans influenced (and generally not for the better) North American native life.  So, by the time early Berkshire settlers encountered Native Americans, Indian lifestyle had already been drastically altered.  Therefore, observations of even the earliest Europeans speculation to get any picture of life  in the Berkshires prior to the earliest (1400-1600 CE) European encounters in NorthAmerica requires some speculation.

By 6,000 BCE post ice-age North American environment had changed – forests had replaced the barren tundra left by the glaciers and the massive early animals had been replaced by more of the smaller animals we see today.  Indications are that the inhabitants were adapting to these different food sources culminating in various forms of agriculture and a – still migratory – but more settled form of life.

With increased control of food sources, population on the continent is estimated to have approached a million by 2500 BC (roughly simultaneous with the earliest Egyptian civilizations).[i]

By 1500 BC, inhabitants of central Mexico had become successful at cultivating maize and beans. About 500 BC cultivars that would thrive in climates north of the Rio Grande were developed and cultivation spread rapidly. By 700-1500 AD, cultivation would have spread to the northeast.  With New England’s shorter growing season, it is likely tribes in the Berkshire environs would have been unable to depend that completely on horticulture and would have remained smaller, more mobile bands the better to continue to fortify crops with gathered native plants and hunting.

Other than dogs, Native North Americans apparently did not have domesticated animals.  In fact the pigs and cows the Europeans brought with them destroyed many of the unfenced fields of the Native Americans.

Eventually (4,000 years ago? – see  “Signs of Life at Kneesha Bog“) bands of 20-50 would have started returning regularly to the Berkshires to fish and hunt for small game.   Limited  but consistent archaeological evidence suggests they practiced forest management through burning and gathered elsewhere  (perhaps along the Hudson River) to plant and harvest corn and other crops.

These bands would gather as larger tribal groups.  These tribes would have been in almost continuous conflict  over territorial boundaries.   Some of the conflicts may have involved tribute or hostages.   Indians often took hostages from other tribes to replace lost loved ones and maintain their kin network.

However these would not have been the “all or nothing” wars the Europeans had begun to fight by the 16th century.  For one thing, the Indians didn’t have the killing power of the Europeans.  For another, the Indians had a culture of sufficiency – when they got enough to feed and shelter themselves, they stopped working, fighting…..whatever.  Native Americans did not begin killing more than they could eat until incented to gather pelts to exchange for European trade goods.

Economic life in the more concentrated populations might include paying tribute to a chief or priest – gifts or labor.  However, Native Americans did not have the concept of accumulation that accompanied early European capitalism – to acquire land or other property that could be invested for production or future consumption.  They had a sense of what was their territory but nothing like the European concept of property ownership.

The tribes in the northeast – and probably most of North America – practiced animism, beliefs which made them view themselves as much more integrated with nature than the European arrivals would.  Through a combination of admiration and fear of nature, Indians would have hesitated to kill or consume more than they needed.

Native American population and lifestyle varied across the continent.   The native inhabitants of North America spoke at least 375 distinct languages by 1492.  Despite language differences, evidence has been found of long distance trade.[i]  As horticulture became more prevalent, population groups became larger and more specialized.  In the American southwest, Indians created dams and irrigations systems and developed sophisticated societies with rituals and laws.

Another society with some urbanization and specialized ritual grew up along the Mississippi.  About 800 A.D. these mound builders turned to cultivation of maize, beans and squash and started constructing substantial towns with earthen pyramids topped by wooden temples.  The largest group, the Cahokia, developed, between 900-1100 AD a town (east of what is now St. Louis) with a population of 10,000 to 40,000 and 100 earthen temple mounds.

Evidence suggests these towns lasted several hundred years but then dispersed – perhaps because population growth had caused them to use up all the nearby resources, because population concentration and biological waste had led to disease, – or because they had attracted more conflict from their neighbors.