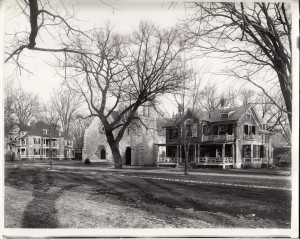 This Queen Anne style building has two stories, a slate roof and has been altered. It has a three-bay, center entrance that is wood framed. It has a gable roof, double bracketed eaves and two shed-roofed dormers with 18-light windows on the front over outer bays. There is a one gable-roofed rear wall dormer, a brick endwall chimney on the left side. The exterior is wood clapboard (1st fl.) and decorative shingle (2nd fl. and dormers) siding. There is a two-story front entrance pavilion with modillions. There is a Palladian window on the second floor with tracery in the center, an arched window, embellished with entablature complete with a dentiled cornice, and pilasters flanking smaller side windows. Modillions and six turned posts remain from the original porch. There are large Queen Anne-style 29-over-1 multi-pane sash windows that flank the pavilion on the second (small square lights in the upper sash). There are 15-light French windows on the side of the pavilion and a one-story box bay window on the right side. There is a one-story rear lean-to; original double front doors; and a stone foundation.

John M. Cook*, identified in an 1885 directory as a farmer and manager for E.J. Woolsey, purchased this lot from Elizabeth Bangs* in 1883 and built this house soon after. Cook resided here for a year or two, but by 1886 the house was rented out to Ambrose Kingsland of New York, and was thereafter rented to “distinguished summer visitors.”[1] In 1905 it was purchased by Father William F. Grace, acting on behalf of the Roman Catholic Bishop of Springfield, for use as a rectory for St. Ann’s. The Willows continued to be rented out until 1912, when the new church had been built and Father Grace took formal possession. It was used as a rectory until it was sold and converted to a funeral home currently owned by Edward J. Roche.