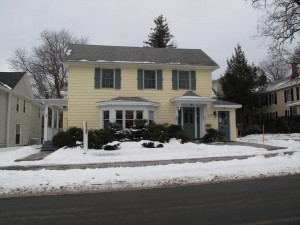 This Italianate style building has two stories, an asphalt shingle roof and has been significantly altered. It is a wood frame, gable roof building with wood shingle siding. It has an early entrance door with arched double windows & arched sidelights in the door surround.

The roof overhang and façade organization do not suggest Federal period as older photo shows back wall chimneys. Original documentation seems to rely on hearsay. Physical inspection of style building is needed to confirm the year of construction.

This building was originally a modest 3-bay Federal Style house with 6 over 6 windows typical of the Period. An Italianate entrance canopy with pendants and brackets was probably added in the 1860’s as was the bracketed side porch which was later enclosed. The picture window in the front façade has altered the balance of the original Federal design.

This house is said to have originally stood on Main Street and moved to its present site to make room for the Second County Courthouse in 1815. The house was owned and probably built by the Stanley family. John Stanley, a carpenter may have been responsible for the Italianate porches added to the house in the 1860’s.

The property was purchased by Timothy Doherty in 1984 and then by Lenox Realty Corp. in 1999.