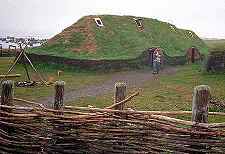 The first Europeans to get remotely close to Massachusetts were probably Vikings from Iceland. There is archaeological evidence of a 1,000 year old Viking settlement at L’Anse Aux Meadows in northern Newfoundland.  No permanent settlement survived.  They may have come earlier, but the first records of European stopovers in the search for Cod and whales are from the 16th century.

European Fisherman and Explorers by the 16th Century

European travel to and around Massachusetts picked up to near traffic jam levels by the 16th century.  A rush for a Northwest passage to the Orient and gold starting in earnest with Columbus’s return to Europe from his 1492 voyage.  It was thrown into high gear after Pissaro’s conquest of the Incas and their gold in 1532. END_OF_DOCUMENT_TOKEN_TO_BE_REPLACED