On May 9, 2015, Cornelia (Nini) Gilder, co author of Houses of the Berkshires*, gave a great talk at Ventfort Hall about Margaret Emerson McKim Vanderbilt Baker Amory (1884-1960).

In a clear case of six degrees of separation, Nini shared a photo of Margaret as a Red Cross Director at Hickam Field in Hawaii.  Nini had the photo because Margaret (now going by “Mrs. Emerson”) had been Nini’s mother’s boss during WWII.  In the spirit of that remarkable coincidence, Nini sported her mother’s natty Red Cross uniform for part of her talk (with a photo of Margaret in the background).

We can only hope that someday Margaret’s colorful, old money life gets made into the movie it deserves.  Before marrying money, it helps to start beautiful and with a fortune of your own.  Margaret was heir to the Bromo-Seltzer (started in Baltimore by her father) fortune and married a wealthy Baltimore physician,  Dr. McKim.  She went to Reno to obtain a divorce, on the grounds of cruelty and failure to provide**, in 1910.  She wed fabulously wealthy 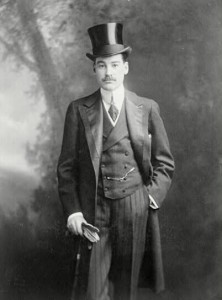 Alfred Vanderbilt in London in 1911.  One source reported that Dr. McKim was on the verge of bringing an alienation of affections suit against Vanderbilt (whose first wife had divorced him claiming adultery) but was paid $200,000 by Margaret’s father to drop the suit**. (You can’t make this stuff up.)

A grandson of family patriarch, Commodore Vanderbilt, Alfred was a sportsman and coaching enthusiast but also made a few decent real estate deals such as the Vanderbilt Hotel. (It helps if your family’s holdings include a home on what would become Park Avenue and Grand Central.) 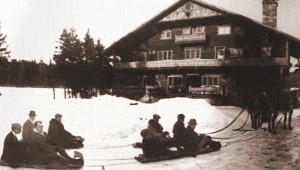 In 1901 Alfred had purchased a magnificent Adirondack Lodge at Sagamore Lake.  It would remain in Margaret’s family until 1954 and be the site for entertainment of notables such as Gary Cooper, Jerome Kern and General George Marshall.***

Alfred had two children, Alfred II (1912-1999) and and George III (1914-1961) with Margaret before sailing on the doomed Lusitania, in 1915,  for an the Annual Meeting of the Horse Breeder’s Association and to bring supplies to the Red Cross.   A gentleman to the end, Alfred allegedly perished after giving his life jacket to a woman who could not find hers.

The Widow Comes to Lenox

The widow would have been familiar with Lenox as a visitor to her husband’s cousin (Emily Vanderbilt Sloane – Elm Court) as well as other society cottagers.   Mrs. Sloane’s daughter (Lila Vanderbilt Sloane Field) was a good friend would become a neighbor having built High Lawn in 1909. 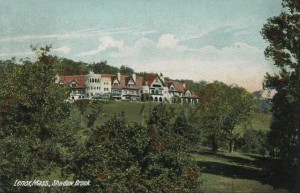 So it is not surprising that Margaret chose, a month after her husband’s death to come to Lenox where she rented a modest summer place – Shadow Brook.  In 1916 she had to find new quarters as the property had been sold to Andrew Carnegie who could no longer, because of the war, go back and forth to his castle in Scotland.

From 1916 to 1917 she rented Ventfort Hall.  Nini had several pictures of the children enjoying the grounds including a birthday party photo that included Nini’s mother.

Erskine Park had been built for George and Marguerite Westinghouse in 1890 and was, by 1911, surrounded by 600 landscaped acres.  Margaret bought the property on the condition that the elaborately decorated house be razed.

She went right to work to build a brand new Delano and Aldrich designed Colonial Revival home with a large music room and portico.  She particularly liked the fact that the grounds included space for croquet, tennis, and a gymnasium for the boys.  Nice pad for a few weeks a year (since the family also lived in Palm Beach, New York,  and the Great Sagamore).  Holmwood, named for a spot in England that was the site of a memorial to Alfred Vanderbilt, was sold to the Foxhollow School for Girls in 1939.

Margaret barely made it into Holmwood in time to marry husband #3, Raymond T. Baker (1875-1935).  In another “you can’t make this stuff up,”  she had met Baker in Reno when she was getting a divorce from husband #1.  One of the social columns** reported, before she married Alfred, that “Mrs. McKim created quite a stir in San Francisco on one occasion when she departed for the orient, waving kisses to Ray Baker, the novelist and clubman, when the steamer left the dock.”  They had a daughter, Gloria (1920-1975).

They divorced in October 1928.  Not one to let the grass grow under her feet, Margaret married husband #4, Charles Minot Amory (he was from Boston – they had met in Palm Beach) in November 1928.  They divorced several years later.

NoteThis house as well as       are examples of another historic preservation problem — the house remains but is altered in such a way as to no longer have any historic integrity.

A low stone wall along front property line is an extension of stone wall in front of 15 Franklin St.

This 1 ½ story gable-front house is an example of a vernacular form found throughout the country. The 6/6 window sash indicates that this house was probably built before 1850, although houses of this type were built through the end of the 19th century.

In the 1840’s Henry Cook divided up some meadow land to sell as house lots. In 1848 he sold this lot to George Walker and in the deed it was noted that the house was then occupied by Rev. Henry Nick, who may have been the Methodist minister. The Methodist Church at that time was located at the corner of Church and Franklin streets, so this house may have been used as a parsonage.

The lot also had an early system of water transportation through subterranean pipes, which carried water from a spring-fed cistern on Cook’s property. The deed for this house mentions these pipes and notes that the buyer of the house was responsible for helping to repair and rebuild them is necessary.

Ventfort Hall Gilded Age Museum at 104 Walker St. was built by George and Sarah Morgan as their summer home. It is an imposing Jacobean Revival mansion that typifies the Gilded Age in Lenox. Sarah, the sister of J. Pierpont Morgan, purchased the property in 1891, and hired Rotch & Tilden, prominent Boston architects, to design the house. 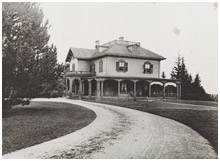 The original Vent Fort was owned by the Ogden Haggerty family of Boston.  Their daughter, Annie Haggerty Shaw, married Robert Gould Shaw, who led the Mass 54th (the first African American regiment as portrayed in the film “Glory,”) during the Civil War. 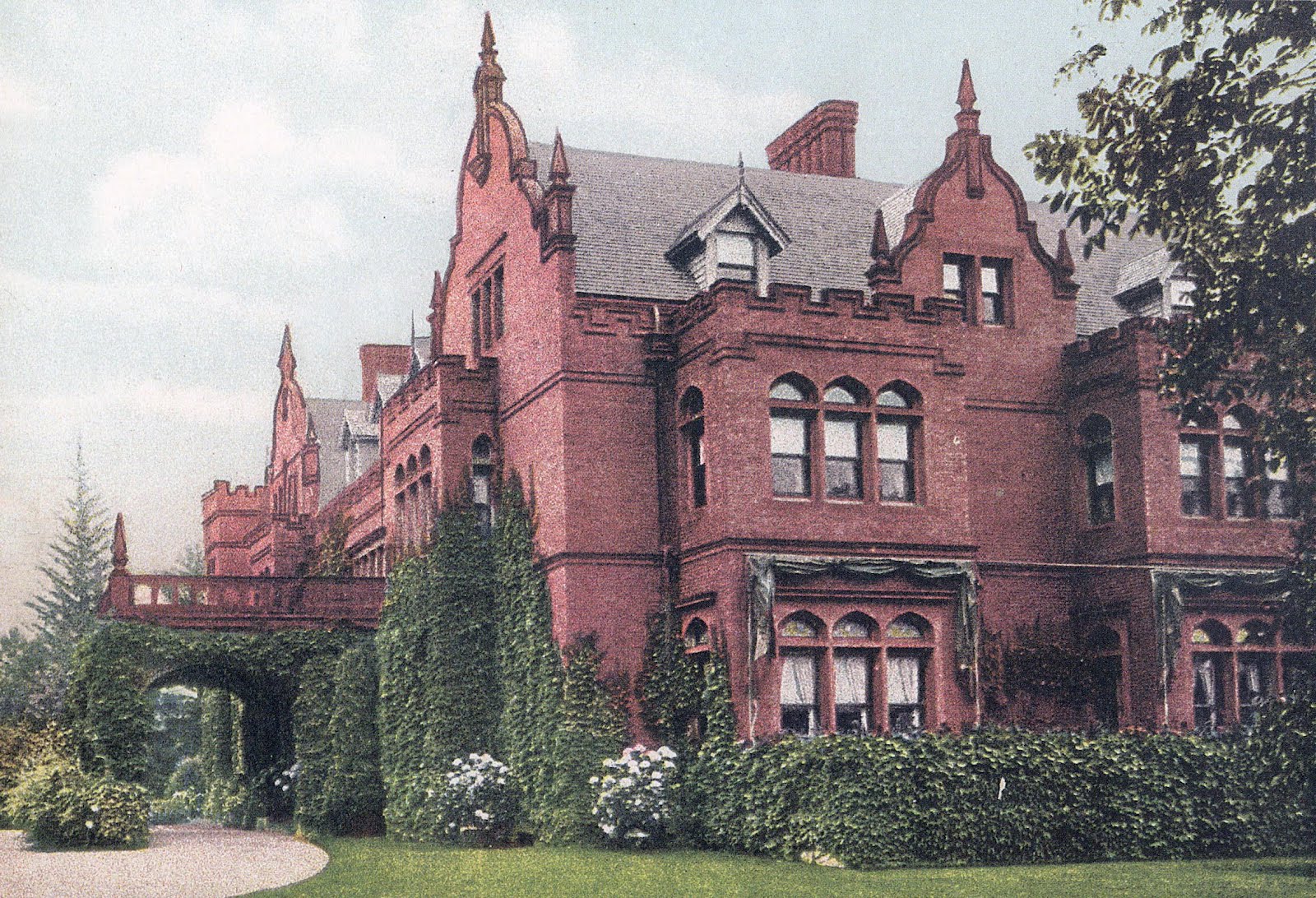 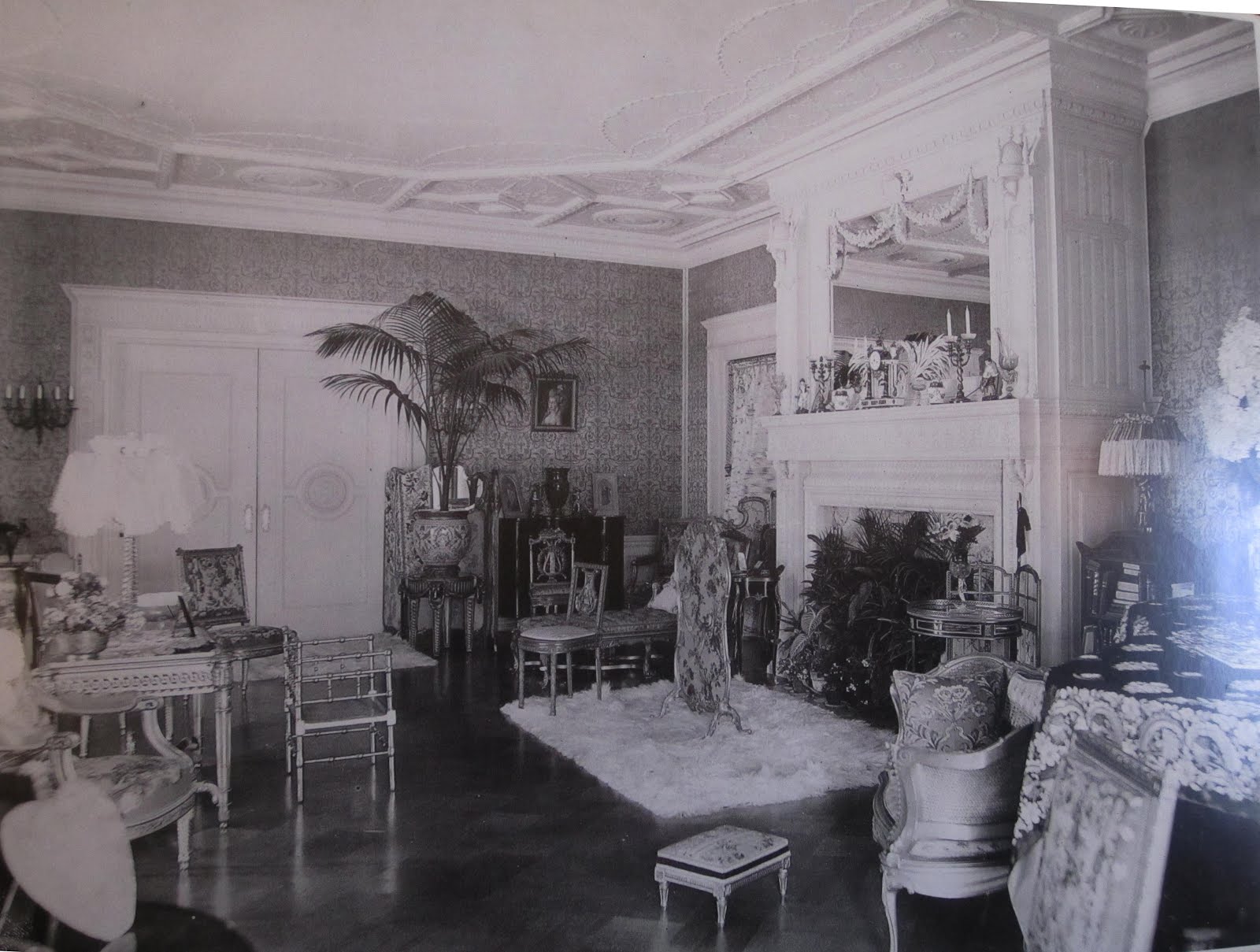 Now on 11.7 acres, Ventfort Hall was originally the centerpiece of a large landscaped garden of 26 acres. The mansion, constructed of brick with brownstone trim, has an impressive porte cochère covering the entrance while the rear of the house, which once had a long view to the south of the Stockbridge Bowl and Monument Mountain, has a wood veranda along its entire length.
Described at the time of its completion as “one of the most beautiful places in Lenox,” the house had “28 rooms, including 15 bedrooms, 13 bathrooms and 17 fireplaces.” Typical of the period, the interior features a soaring three-story great hall and staircase with wood paneling detailing. Other rooms include an elegant salon, paneled library, a dining room, a billiard room and bowling alley. It was designed with all the latest modern amenities, numerous ingeniously ventilated bathrooms, combined gas and electric light fixtures, an elevator, burglar alarms and central heating. The property contained several outbuildings, including two gatehouses, a carriage house/stable and six greenhouses.
After the deaths of both Sarah and George Morgan, the house was rented for several years to a young widow, Margaret Vanderbilt, whose husband, Alfred Gwynne Vanderbilt, had died on the Lusitania.

In 1925, W. Roscoe and Mary Minturn Bonsal purchased the house after seven years as tenants. Bonsal, a prominent figure in the expansion of railroads throughout the southeast, built the first cross-state railroad in Florida and served as president and treasurer of the North & South Carolina Railway and the South Carolina Western Railway.
After the Bonsals sold Ventfort hall in 1945, the house had a series of owners and was used as a dormitory for Tanglewood students, a summer hotel, the Fokine Ballet Summer Camp and housing for a religious community.
In the mid-1980s the property was sold to a nursing home developer who wanted to demolish the building. 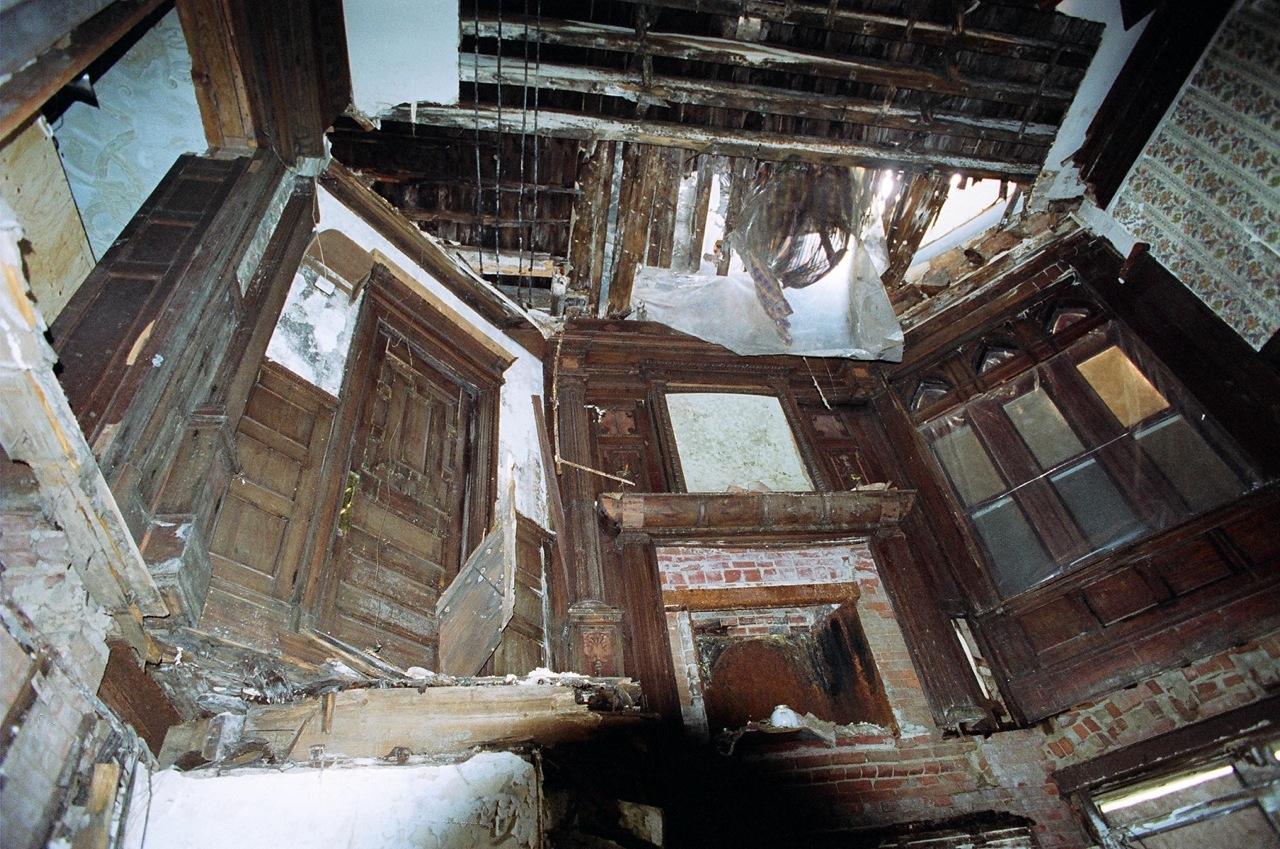 In response to this threat, a local preservation group, The Ventfort Hall Association (VHA), was formed in 1994. On June 13, 1997, with the help of many private donations and loans, and with a five-year loan from the National Trust for Historic Preservation, VHA purchased the property and has extensively restored the façade, first and second floors. 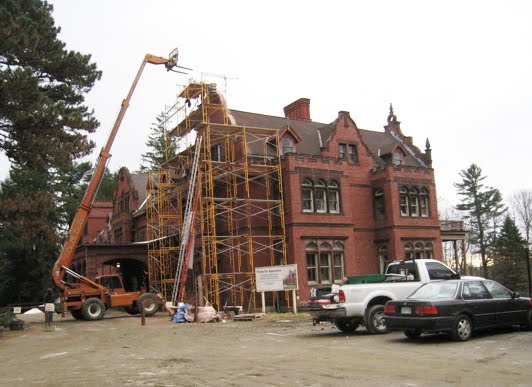 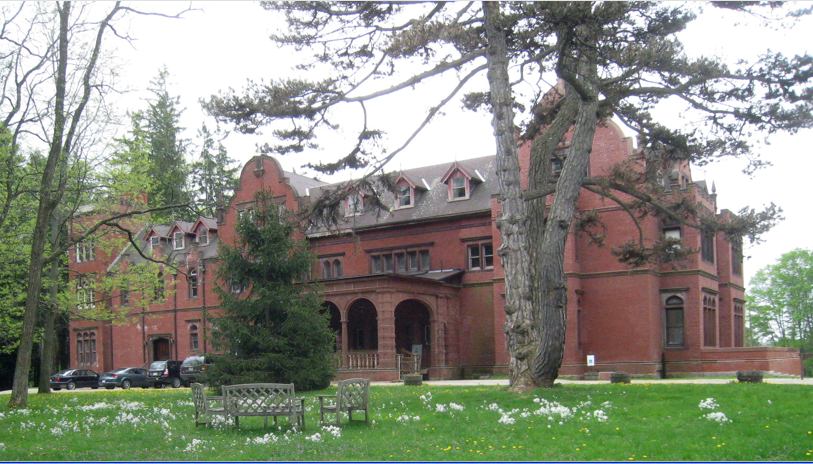 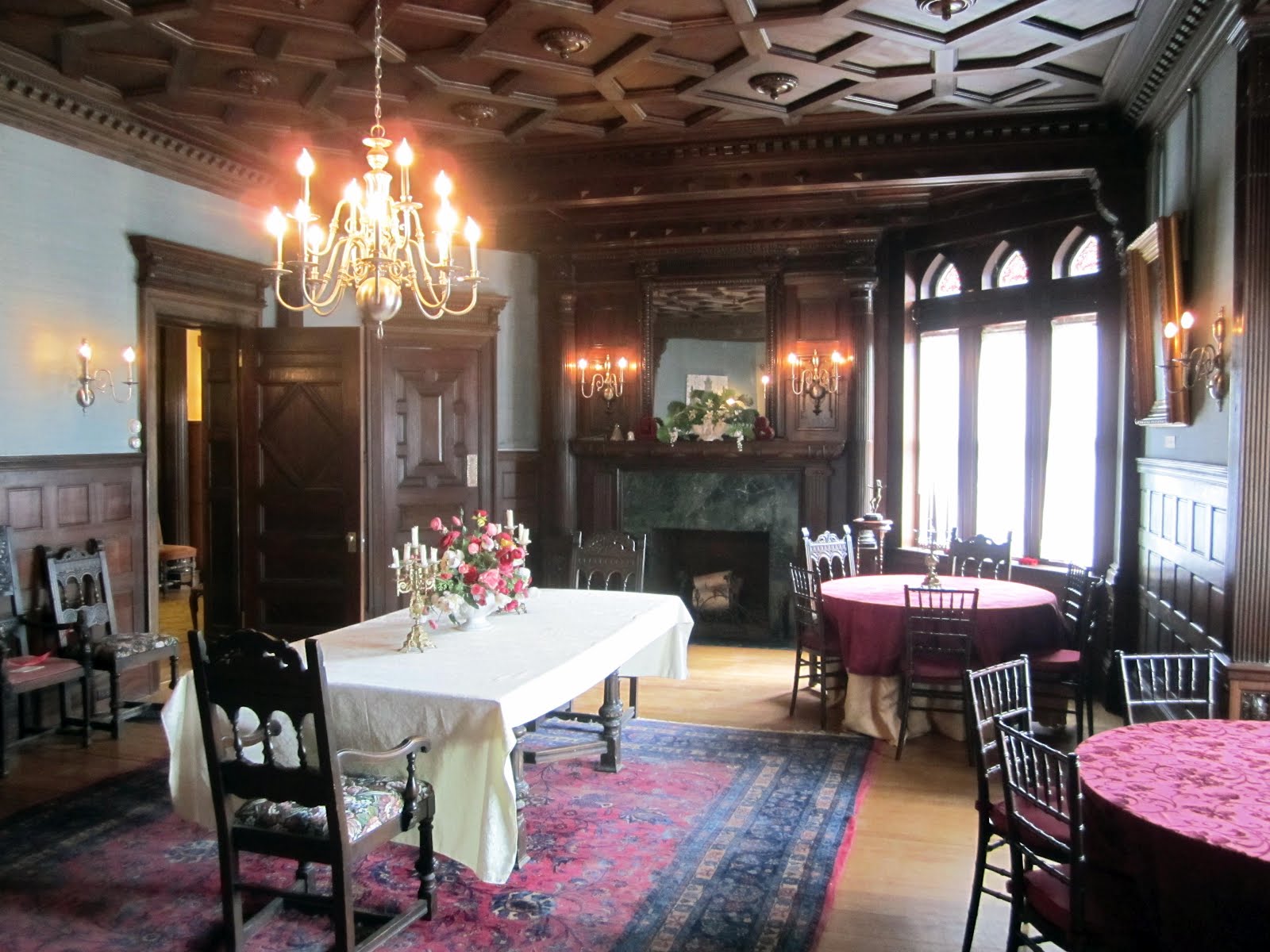