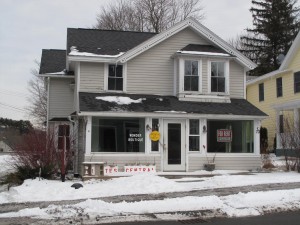 This Gothic Revival style wood frame building has two stories, an asphalt shingle roof and has been significantly altered.

This is the earliest of the trio of Mahanna houses built on Church Street (the other two are located at 56 Church and 62 Church).

Timothy Mahanna (spelled Mahanny in the early records) and his wife Bridget (nee Norman) were among the first Irish immigrants who settled in Lenox in the 1840’s. Bridget was involved in the formation of the Catholic parish in Lenox. In 1846 she opened her home to Father Brady who said Mass there on an informal basis for several years.

The Mahanna’s seem to have lived at several addresses before they purchased the lot in 1856 and built this home. The house remained in the Mahanna family though the 19thth century and eventually come into the ownership of William Mahanna.