Proprietors were akin to a modern corporation in that they owned a % of the land and acted as a board of directors for the town. The money they put in would have gone initially toward purchase of Lot #8.  Further payments would have gone to  legal costs, surveying and any remaining costs for Indian claims. Costs for meeting house and roads generally were shared among proprietors and settlers. Proprietors might or might not be settlers (see “New England Town Development”). 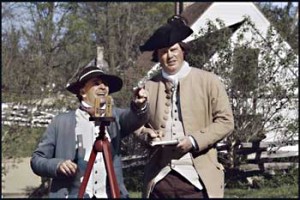 Proprietors may have wanted to get cheap land and have been willing to commit to the hard work of clearing or may have been pure investors hoping to gain by the appreciation in land value to be expected as the land was cleared and roads were built. The first distribution of property was by lots with later distributions being settled based on the % each proprietor had put in. In the case of Lenox, several rounds of distribution seem to have taken place as soon as the surveying was completed.  Lenox proprietors held an average of about two hundred acres.

Our information on these important early investors is frustratingly sketchy.

The George Tucker manuscript lists (from documents now at the Berkshire County Middle Registry of Deeds) the proprietors below.  If other sources* listed other information about the proprietor it is added  here to give some flavor of the people involved.  It is clear from the limited facts available that the investors who were not planning to settle, quickly monetized their holdings.  In a non-money economy such as Colonial Berkshire County,  and land changed hands numerous times from town founding to 1775 and seems to have provided cash for other uses, settlement of debt, etc.

Israel Dewey** – Elected to Highway Committee,  Meeting House Committee; the Deweys must have been major investors in Lenox, holding a half dozen of the original lots.  There are 12 Deweys buried at Church on the Hill

Solomon Glezen – Elected to Highway Committee; dismissed from original committee to build meeting house, elected to new one; in 1771, on behalf of the town of Lenox, Israel Dewey, Eliza Willard and Amos Stanley rented Lot# 6 (School House Lot – just north of the current location of the Church on the Hill) to him for use by the town; in 1772,  100 acres of the lot was sold to Jonathan Foster of Lenox with continued yearly rent by the town of “one peppercorn.”

Eleanor Gunn – The only female listed as a proprietor, Eleanor (the former Eleanor Ingersoll) appears to have been the widow of Capt. Stephen Gunn who died at the age of 39 in 1759 of small pox in Great Barrington. Typical of other settlers of south Berkshire County, Capt. Gunn had been born in Westfield. Given the date and his title, his death may have been related to the last French and Indian War. The Registry of Deed records show “Gunn” on two lots near the Pittsfield line but descriptive information suggests Oliver Partridge (who along with other Ingersolls had an abutting lot) and or the ubiquitous Sam Brown of Stockbridge forced the widow to sign over her land in payment of a debt.  Mention is made of “having found no goods in Widow Gunn’s house.”

Elisha Martindale – Elected to Committee to Build Meeting House and Committee to procure preacher; the Martindales were also  holders of a large number of initial lots but there are no Martingales listed among the Church on the Hill burials.

Stephen Nash-dismissed from committee to build meeting house for failing to do anything; one of the Stephen Nash’s had participated in purchasing 1/2 of lot #6 (which was to be used for the school) from Sam Brown Jr. in 1764.  It looks like Sam Brown may have purchased the same property from Josiah Jones in 1763.  Of course the price was higher each time the property changed hands!

Earlier settlers (such as Jonathan Hinsdale) may have already been resident on the land (whether proprietor or grant land) and may have rented or made arrangements to purchase after the initial lot selection.

**Signers of the 1774 Non Importation Agreement