Not only does New England have plentiful rainfall, but it has fast moving rivers and streams with steep drops – making for – if untouched – clear, pure water from streams and lakes.

Consequently, most early settlers in Lenox  – and elsewhere in the new world – would have gotten their water from naturally occurring sources.  Access to clean water was one of the reasons for the rapid population growth in the early days of the colonies.

As settlers moved further from open water sources, springs would have been tapped or wells dug.  As had been done since the Middle Ages, water was transported  by taking advantage of natural elevation or elevation created by wind or hand powered pumps. At first wooden pipes were used then iron pressure pipes starting in the mid 19th century.  Extensive piping and pumping would have been limited to wealthier homeowners.  And in fact, most early water systems were private and provided no guarantee of water for everyone.   Hauling water from a shared well or cistern (as still happens in the third world) would have been common.

From Any Water Will Do to Potable

Because of low population density and the often fast moving water cited above, the Berkshires may have had less water borne illness than other areas in the 18th and 19th centuries.  However, as we now know, water that looks clear can still contain killer bacteria.  In 1854 Dr. John Snow deduced that water carried cholera by gathering data on the victims of the disease in a London neighborhood.  His research showed disease concentration around a particular public well.  By the 1880’s Robert Koch had closed the logic loop by showing that microorganisms in water could transmit cholera, typhoid, gastrointestinal distress and other illnesses.

Soldiers have been told to place their latrines downstream since the Romans.  With the development of germ theory the importance of keeping wastewater separate from drinking water had increased. Unfortunately, disposing of waste water in rivers and lakes continued.  And, industrial waste became a more common contributor to wastewater run off.  The earliest treatment was by running waste water through sand or aerating.

Chlorine had been used to kill these micro-organisms as early as 1847 (in Vienna, Austria).  Its use became common in US water systems in the early 20th century.  By the mid 20th century chemical pollutants had been identified as a threat – even to well water- and standards for drinking water became more stringent (Federal Clean Water Acts 1970, 1974??)

The combination of the growing importance of purifying drinking water and increased demand made systematic sourcing, treatment and distribution a critical civic function by the beginning of the 20th century.

Before there was disease theory, there was suspicion of water as a drink, so, but there was still need for water for washing, cooking and putting out fires. By the late 19th century, household plumbing (including bathtubs and flush toilets) had started to become common in wealthier homes, causing a spike in per household consumption at about the same time population growth was accelerating.

In addition manufacturing had become a major water user.

While demand was increasing, supply was stressed by:

The costs of projects to both source and purify drinking water and treat wastewater (to ever higher standards) have made water access, transport and treatment one of the largest expenses of towns, cities and states.  Historically, these massive investments have been resisted until forced to deal with a water crisis. 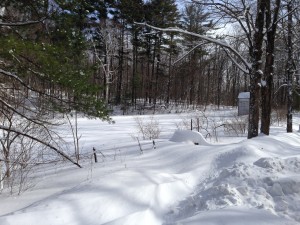 With considerable foresight this private water company bought up watershed – bit by bit, and continuously expanded reservoirs; both by building new resevoirs and increasing dam height on existing reservoirs.  The details are nice documented by retired Lenox DPW head Jeff Vincent below in “History of Lenox Water System Facilities.”.

Lenox was fairly typical of water systems of the day in serving a limited % the population.  Although Mr. Rockwell, Curtis and Post were all permanent Lenox residents, it may have been the needs of the water hungry (presumable early adopters of indoor plumbing) cottagers that kick started the project.

Lenox was somewhat unique in

Some the expansion projects (as was common elsewhere) may have been triggered by water shortages:

..and after the town bought the private water company in 1947

From Private to Town Owned

As noted above, the Town of Lenox bought out the private Lenox Water Company.  The town funded the purchase price of $173,000 as well as $60,000 for improvements to the distribution system.  In 1956, 26,000 feet of water lines were turned over to Lenox by the City of Pittsfield.  The West Street booster pump station was constructed to raise the gradient in Lenox center and to increase the flow from the reservoirs.  The first major new reservoir since 1891 was completed in 1959. In 1985, a moratorium had to be called on new connections to the town’s water distribution system.

In 1985, a special town meeting appropriated close to $6MM for the town’s share of the Washington Mountain Watershed Project which included a water treatment plant, storage tank, water transmission plan, transmission main and a water treatment plant for the existing Root Reservoir.  In 1995 the town installed a pump station on New Lenox Road to increase the amount of water that can be taken from the City of Pittsfield.  In 2005 work was completed on the Upper and Lower Root Reservoirs.  This enhanced the safety of the dams but did not increase storage capacity.

The demand for water in Lenox is not expected to decline.  Full-time population growth is currently slow but tourism remains the town’s major industry and brings in more and more summer guests.  In addition, the many 100+ year old pipes incur waste.  The current reservoirs are at capacity which is somewhat of a moot point since there is no additional run off anticipated from the watershed.

Resources for wells or other water sourcing will have to compete for funds with the investments needed to meet heightened standards for waste water treatment.

Lenox is not unusual in facing challenges in meeting water demand and satisfactorily treating its wastewater.

History of Water Systems and Treatment