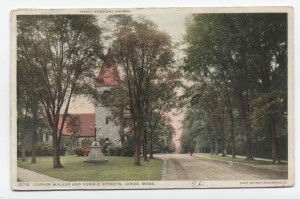 By the turn of the 20th century, the episcopal church in Lenox had  added four grand looking  gilded age buildings to Lenox:  church, chapel, and rectory in Lenox village and St. Helena’s in New Lenox.

Episcopalians Had Uphill Battle in a Congregational State

But the Anglican Church, throughout Massachusetts,  had an uphill battle establishing itself.

The puritan (Congregational) church was, in the early days of Massachusetts, as close to a state church as any would ever be in America.  Puritans had come  to  Massachusetts in 1620 primarily because they objected to the Church of England (the parent religious body of the Episcopal Church in the United States).  In the early days, church and state were totally intermingled as to law, voting and community activities.  By 1700, the puritan theocracy had been largely superseded by secular royal government in Massachusetts.  The royal government, in fact, forced the creation of and tolerance of an Anglican church in Boston.   But the “tilt” to Congregationalism remained in Massachusetts.  By the time the first settlers arrived in Lenox, there were 13 Anglican parishes — all east of Worcester.

As late as 1767, when Lenox was formed, towns were still required to have a church and citizens were taxed to support that church.  It went without saying that the “official” church was the Congregational Church.  To be exempt from paying this tax, a citizen had to be certified to be a member of another “official” church and that was not possible for Anglicans in Lenox until 1793.  The tax for support of the church continued until the new state constitution in 1834.

Although many of Lenox’s early settlers were Anglican, including soon to Revolutionary War heroes, Azariah Egleston and John Paterson,  many tories were also Anglican and growth of the Episcopal church was somewhat retarded during the Revolutionary years due to its ties to England.

At the end of the Revolution the American Anglican Church declared its independence from the Church of England and took on the official title Protestant Episcopal Church in the United States of America.  In due course, American bishops were appointed and the Book of Common Prayer was re-writen to be acceptable in the new United States (among other things, dropping blessings to the king).

The wilds of early Berkshire County were territory for missionaries.  There religious needs were met by the Society for the Propagation of the Gospel in Foreign Parts(SPG).  The first Anglican priest to visit Lenox, the Rev. Roger Viets, was SPG from Simsbury, CT.  It was trying work.  He wrote that the people were so poor they could not provide enough to cover the expenses of his long and difficult journey to Lenox and beyond.  In 1764 the beleaguered Rev. Viets was arrested in Great Barrington for conducting a wedding.

With the appropriate infrastructure now in place, Lenox area Anglicans organized an official parish in 1793.  It initially included Lenox, Lee, Stockbridge and Pittsfield.  In that same year Deacon Daniel Burbans was hired as rector for Lenox.  He was rector for Lenox and Lanesborough as well as taking up the missionary work of the now deceased Rev. Bostwick throughout the Berkshires.

It is not completely clear where these early Lenox services were conducted in the newly built county court house.  (Then on Walker St.; still standing today on Housatonic).

Rev. Burhans took a position in Newton, Connecticut in 1799 and Lenox engaged the Rev. Gamaliel Thatcher to be shared with Lanesborough. He was followed in 1800 by Rev. Ezra Bradley – also shared with Lanesborough.  In 1801 Lenox reached an agreement to share the services of Rev. Samuel Griswold with Great Barrington.  Rev. Griswold was a nephew of the intrepid Rev. Roger Viets who had conducted the first Anglican services in Lenox.  He led the congregation through the completion of their first church in 1818.  That same year he was dismissed over an unspecified quarrel.

The Act of Incorporation of 1805 lists the following from Lenox:

Lenox residents added to the incorporation in 1807:

(Rev. Ezra Bradley also mentioned as sharing with Lanesborough in 1800)