Lenox Becomes the County Seat in 1782

In November of 1782* the Massachusetts state Legislature appointed a committee of three men to visit Berkshire County and pick a location more centrally located than Great Barrington.

The committee recommended that Lenox become the county seat after January 1784 to give the town time to erect a suitable courthouse. It also gave Great Barrington, Stockbridge, and Pittsfield the opportunity to protest the choice.  Somehow Lenox persevered and remained the center of Berkshire County legal activities until 1867.

In May 1786 planning for the new courthouse began and the first session of court was held in September 1787.

On September 11, 1787, the Court of Sessions appointed Azariah Egleston and Elisha Bradley to supervise building  the new courthouse.

Other names that would show up frequently in the days of the Lenox early republic, John Bacon and Caleb Hyde were put to supervision of building the jail.  It was to be located on Stockbridge Road near what was to become the Winthrop Estate and later the Windsor Mountain School.

The new courthouse was in use by 1791 or 1792.  It was located at Walker and Main — about where the current Town Hall is located.

The first courthouse had a two story courthouse** with 12 x 24 pane windows and banked seats for spectators–quite grand for a little farm town. 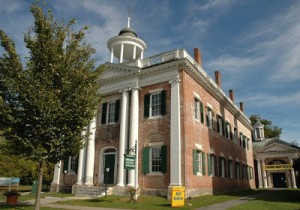 Court activity was robust and by 1815 Lenox had outgrown the original court house.  The handsome building on Main Street (completed in 1816) currently used as the Lenox Library was the second county court house in Lenox.

The Fate of the Original Court House

The original simple court house still stands (with later additions and alterations) on Housatonic Street.  The, at one time, impressive entrance, now  faces Church Street where the coffee shop is attached.

The courthouse was moved to its current location when the new Town Hall was built in 1901. 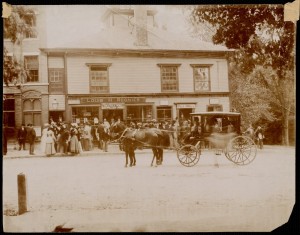 When the second court house was built, the original court house was re-purposed as a town administration building.  It was rotated (using canon balls!) to face Walker Street as the Town Hall does today.  It was an active center of 19th century town activity with a bank, post office, and shops.

The early proponents of Lenox as the county seat were far sighted to put money into this important town development. As the center of Berkshire County legal activity, Lenox attracted visitors, professionals and commerce beyond that of the typical 18th-19th century farm town.  The presence of the court attracted educated families such as the Sedgwicks who would contribute to turning Lenox into a rural literary and educational center.

The presence of the court also created non-farm jobs ranging from working in the Old Red Inn(Curtis) Hotel, renting out horses, clerking and provisioning visitors.

An editorial from the 1830’s* paints a picture of how lively the little town would have been when court was in session:

“Lenox is alive during the administration of Justice.  The goddess has occupied her throne here for more than a week past, and our Village had abounded with Judges and Jurors, lawyers and litigants, prosecutors and prosecuted.  To us who live in the country, the occasion is quite imposing.  It presents to us a vast variety of characters:  young attorneys in the bustle of new-found business, and the older ones assuming more and more dignified gravity of the bench; waiting jurymen chatting in little clusters by the wayside; worrying clients complaining of sleepless nights; witnesses of all orders and descriptions.  Spectators trading horses in the street and politicians smoking over government affairs in the bar room.  Our boarding houses have their long tables lined on both sides with earnest applicants, and all expect more business, more calls, more conversation and more cheerfulness.  Messages are sent, and errands done between one end of the county and the other; business accounts are settled, plans laid; caucuses, conventions and singing schools agreed upon; newspapers subscribed for and distant matters in general arranged for the ensuing Winter.”

*Lenox Massachusetts Shire Town, by David H. Wood, published 1969 as a follow up to the Lenox bicentennial