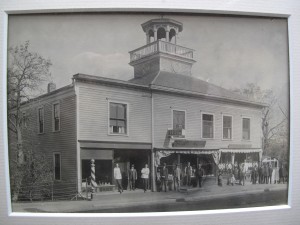 This undetermined style building has two stories, an asphalt shingle roof and has been altered. It is a wood frame building with small dentils along molded cornice; hipped roof; 3-bays facing Housatonic St. façade at 2nd floor and a rear wall chimney on North side.

This square, two story building has a hipped-roof with square cupola, and is similar in plan to early New England meeting houses. Store fronts and additions were built on in the nineteenth century, and most of the original detailing has been removed or obscured, but the original building is still recognizable from the description in the Tucker manuscript:

“It was of wood, constructed for the courts only. The entrance was from the west, through double doors around which was some carving, and over it a fanlight window. Their (sic) were lobbies on either side of the door, 15 feet in length and 8 feet in width, for jury rooms. The ceiling of the courtroom was arched, and it comprised what is now both stories of the building… In each of the windows there were 24 lights of glass, 10 x 12. The specifications called for a cupola with a spire and vane.”

Built in 1791, this building originally stood just west of the present Town Hall. This was the first County Courthouse, built several years after the county seat was moved from Great Barrington to Lenox in 1784. When the new County Courthouse was built in 1815 (now the Lenox Library) this building became the Town Hall and Post Office, and remained in that capacity throughout the 19th century. In 1901 the present Town Hall was built, and this structure was moved two years later to its current location by Thomas Post. George Therner purchased it shortly thereafter for use as a business block and apartments.