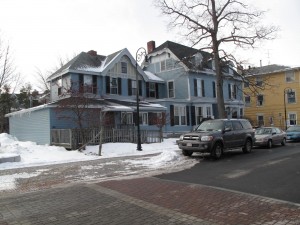 This Gothic Revival/Queen Anne style building has two stories, an asphalt shingle roof and has been significantly altered. It has a wood frame with wood clapboard siding, a Jerkin-head gable roof and dormer roofs. There are three dormers on the front as well as on the rear. First-story faceted bay windows with panels below, flank the current center entrance. There are curved verge-boards on front gables, some 2-over-2 windows and authentic window blinds. It has stone & brick foundations (partially parged).

This large summer cottage contains a variety of decorative elements, including the clipped gables, scalloped verge boards, and ornamental stick work in the gables. The larger section of the building was probably intended to house the summer guests, while the smaller gable front wing appears to have been designed as a servant’s wing or second rental unit. This was one of two identical cottages situated on Main Street, with the gable end oriented to the street.

This was one of two buildings known as the Elm Cottages, built by George G. Haven on Main St., just north of the Lenox Library (Second County Courthouse). The land containing the county jail, jailer’s house, and a county barn, had been sold to Thomas Post, Joseph Tucker, Andrew Servin and Henry Bishop by the “Inhabitants of Berkshire County” in 1871, after the County seat had moved to Pittsfield. Post sold his portion of the lot to George G. Haven in 1881, at which time Haven mortgaged the property for $6,250 and built two large summer cottages. This one was rented to W. C. Schermerhorn, who purchased the house in 1887. In 1910, the building was moved to its present site by Frank C. Hagyard when he built the drugstore at the corner of Main and Housatonic Streets.