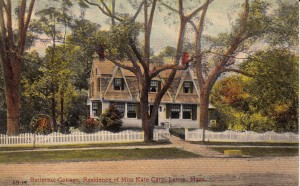 This Colonial Revival style building has two stories, an asphalt shingle roof and has been minimally altered. There is a three-bay, center entrance; wood frame; gambrel roof; and large exposed brick chimney on both end walls of the original house. It has wood clapboard and shingle siding. The front façade (facing Main St.) has three steeply pitched gable dormers. The large addition off the right side of the original house has an end wall chimney and second floor balcony on the right side. There is a series of three gambrel-roofed sections along rear ell off of which is a cross-gambrel wing with a large brick end wall chimney and a one-story extension off its left side, basement exposed with access at ground level. There are some original 6-over-6 and 2-over-2 windows.

LANDSCAPE: There is an allee’ of trees along the entrance driveway which curves northward from Main Street ending in two interlocking circular drives, with adjacent parking areas. There are large bluestone walkways up to front and left side entries, with stone retaining and planter walls. It is a large property with open lawn, many mature trees and shrubs, ornamental, hardwood and evergreen trees and a wood picket fence along Main St. right-of-way.

The 1861 date for the original house suggests that the gambrel roof (as well as the steeply pitched gable dormers) is not original or that this is a much earlier house.

In 1905, the house was sold to Caroline Katherine Carey (Miss Kate Carey), who moved the front portion of the house to its present location, adding on an extensive wing containing servants’ quarters and a storeroom, and apparently remodeling the entire house. Miss Carey used part of the first floor servants’ wing as a carpentry shop, where she built doll and bird houses. Upon her death in 1945, the property was deeded to Trinity Church, who in turn sold it to Joseph Reynolds. In 1951, it was sold again to Maria Veselik, who renamed it Garden Gables and opened it as an Inn and gift shop.