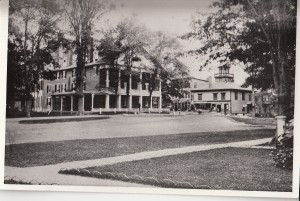 This Georgian/Colonial Revival style building has four stories, an asphalt shingle roof and has been altered. It is masonry construction with brick laid up with common bond–red mortar used in oldest remaining section. It is hipped roof and symmetrically organized with a 7-bay front façade with 3-bay center pavilion with pediment, dentils & modillions. It has a fanlight at attic level with keystone. There are 4 large brick chimneys in front portion of buildging-1 on each side wall, 2 front wall at outer edges of center pavilion. There are corner pilasters. The 1-story front porch wraps around to the right (South) side with a canopied entrance extending from the right. There are front gable dormers on sides of rear extension with Gothic Revival-style decorative verge boards. There is a full-story faceted bay window at the junction between new front section and older rear wing on the right (South) side of building in place by 1898 and the extension of the rear wing, with faceted bay was in place by 1905.

Berkshire Week article quoted from pamphlet put out by the hotel that William D. Curtis undertook a major renovation “soon after he gained ownership of the hotel” (1854) thus dating the angled rear wing to this time period, hence the Gothic Revival-style dormers. The plaque on rear façade reads: “1829 – 1982 Restoration of the Curtis [Hotel] into Housing for Older People [&] Commercial Facilities…Barry Architects, Inc.”

“Senior member of the firm of Harding & Seaver, architects of several noted public buildings in the New England area. Mr. Harding was a native and life-long citizen of Pittsfield, educated in architecture at the Massachusetts Institute of Technology, and had been active professionally since 1896. After working alone for a time, in 1902 he formed a partnership with Henry M. Seaver, and under the firm name acquired a wide and successful practice. His most important works include the following buildings: Museum of Natural History and Art at Pittsfield, 1907; the Y.M.C.A. Building, 1908; Lathrop Hall, 1905, and Memorial Chapel, 1914, at Colgate University, Hamilton, N.Y.; Town Hall at Lenox, Mass., 1903, and Colby Academy at New London, N.H. Mr. Harding also designed a number of fine homes, one distinguished example being the country house of former Senator Crane at Dalton, Mass.” [1]

The Edward A. Jones Memorial Building was designed by Pittsfield architect Henry M. Seaver. He graduated from the Massachusetts Institute of Technology in 1897 and began his own architectural firm in 1901.[2] By 1903 he had entered into a partnership with George C. Harding that lasted until Harding’s death in 1921.[3] During that period the firm designed the YMCA Building in Pittsfield; the Chapel at Colgate University in central New York; the Museum of Natural History and Art in Pittsfield; the Colby Academy in New London, New Hampshire; and the Lenox Town Hall.[4] After Harding’s death in 1921, Seaver kept the office open through 1933, during which time he designed the Jones building at the House of Mercy. Other buildings for which he was responsible in this period include the R.J. Flick Residence; an addition to the Berkshire Life Building in Pittsfield; and an addition to the Pittsfield Boys Club Building. He was also an associate architect on the Pittsfield High School Building.[5]

The Curtis is one of the largest and most imposing buildings in the town center. The original temple front structure, which forms the core of the present building, was probably designed as a counterpart to the Second County Courthouse of 1816 (now the Lenox Library). During the course of the nineteenth century the building was greatly expanded, and some of the decorative elements on these additions are notably Victorian (most notably the gabled dormers on the southern façade). However, the use of red brick and the continuation of the classical cornice around the building gives it a unified appearance that belies its many changes.

This corner has been the sight of an inn of some sort since at least 1773 when the tavern standing here served as a stop on the stagecoach route from Hudson, N.Y. to Pittsfield. Traffic in the town increased after Lenox was made the county seat in 1787. From about 1793 the Berkshire Coffee House operated on this site, and became famous as the gathering spot for people conducting business at the county Courthouse (then located across the street on the present site of Town Hall).

The hotel was purchased by William O.Curtis in 1853, and has been known as the Curtis Hotel ever since. The Curtis family was responsible for much of the hotel’s ensuing success, and William O. Curtis and his son, William D. Curtis, were active members of the community. The loss of the County Court in 1868 had little impact on business at the Curtis, which by this time was catering to a growing number of seasonal visitors. Beginning in the mid-nineteenth century, and accelerating rapidly after the Civil War, a stream of visitors came from New York, Boston, and other cities to experience the healthful climate, take in the views from its veranda, and join in the social activities that took place there. Many guests returned year after year: some, desiring more space and privacy than the hotel rooms afforded, rented houses on Main and Walker Streets, also owned by the Curtis’s. These became known as “Curtis Cottages” and their occupants as “cottagers”; this has been cited as the origin of the term “cottagers” to describe wealthy summer residents in Berkshire.

By the final decade of the 19th Century the Curtis served as overflow housing for owners of large estates, or was used by the estate-owners themselves before and after the “season” when their homes were not fully staffed. The building was greatly enlarged in 1883 and again in 1898 to accommodate these patrons.

Taghconic: or Letters and legends about our Summer Home