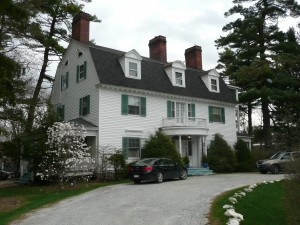 This Colonial Revival style building has two stories, an asphalt shingle roof and has been minimally altered. There is a 3-bay center entrance. The house is wood frame with a gambrel roof and dentil band on the cornice. There are three (3) front dormers with six (6) over six (6) windows. The center dormer has an arched roof and flanking dormers have pediments. There are 3 large brick chimneys, one (1) on each end-wall and one (1) interior. The siding is wood clapboard. There is a first story semi-circular entrance portico with fluted Ionic columns and a balustrade atop. The door surround has an arched transom & sidelights. First story porches on both R & L sides have Doric columns and millwork railings. The second story rear ell has a hipped roof & second story gabled extension with six (6) over one (1) windows. The French doors are flanked by small windows on second floor front facade which is centered above the entrance. There are many authentic window blinds. LANDSCAPE: the semi-circular driveway is centered on the front entrance

This property owned by William T. Walker and his wife was sold to Edwin Spencer in 1852. Mrs. Marion R. Oliver built this house on the site of an earlier house, built by Edwin (Edmund?) Spencer in 1852, and purchased by Mrs. Marion Oliver (wife of Col. R.S. Oliver) and Mrs. Virginia Struthers (wife of John Struthers) in 1874. Mrs. Oliver, a resident of Albany, New York, spent summers in the earlier house for a time, but by 1886 had rented it out. Both stylistic evidence and an 1894 mortgage indicate that Mrs. Oliver had the original house demolished and a more fashionable one built in its place. In 1896 the property was sold to Mr. and Mrs. John Struthers, frequent summer visitors to Lenox. The Struthers’ christened the house “Wynnstay” and used it for many years as a summer residence. It was later sold to the Bonner family, and then again in 1937 to the Gieses.

Donald D. O’Brien purchased the property in 1968 and sold the property to Stanley E. Rosen in 1999. The Rosen’s converted the barn to six guest rooms in 2000 and added an extension to the barn in 2005. The rooms are rented under the name of “Hampton Inn”.