Fortunately both the buildings and grounds of Edith Wharton’s 1902 masterpiece have been largely restored.

The Mount is notable for its lightness and modernity in comparison to the many brick, Elizabethan houses being built in Lenox at the time.  The Mount, on Plunkett Street, is open to the public.

Just down the street, the former 1885 “cottage” of Robert Spencer, Nowood (no pictures found) was purchased in 1911 by Another highly pedigreed family.

Emily Meredith Read Spencer was a descendent of William Bradford and her husband descended from one of Stockbridge’s founding families.  In true gilded age fashion, Emily imported staircases from England, doubled the size and renamed it Shipton Court.

Emily hesitated to build her own “cottage” because she was afraid she wouldn’t live long enough.  Forty at the time, she apparently (no dates found) lived well into the 20th century (Cleveland Armory, The Last Resort) and entertained distinguished guests such as Isadora Duncan with Emily’s pet piglet “Rosie” running through the parlor.

Today it is an inn named Seven Hills. 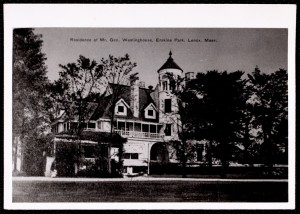 Before there was Erskine Park there was Larchmont (dated 1879?).   We have little information about Erskine Park’s predecessor but we know that George and Marguerite Westinghouse bought the Henry De Bois Schenck farm of 100 acres overlooking Laurel Lake at the Lenox-Lee line.  After adding 500

acres, landscaping and completing the elaborate Queen Anne shown above in 1893, the Westinghouses split their time between this house, a house outside of Pittsburgh, and Washington, D.C.

After they died in 1914, their son George Westinghouse Jr. sold the property to Margaret Emerson Vanderbilt, the widow of Alfred G. Vanderbilt.

She demolished the existing house and built a large Colonial Revival house designed by Delano and Aldrich in 1919.  She named it Holmwood and spent a few weeks a year there.  In 1939, it was purchased by the Foxhollow School for girls.  In 1942 the school also bought The Mount next door.  The school closed in 1976 and the property became a condominium complex and  resort.

Like so many gilded age estates, High Lawn replaced an existing set of buildings.

Lila was the daughter of the  Sloane’s of Elm Court, so she stayed close to home.  She chose a very different (and more contemporary for the early 20th century) formal design by Delano & Aldrich.

The home remains in private hands and the farm is run as a professional dairy operation.  Many of the fanciful farm buildings, largely designed by estate architects Burnett & Hopkins of New York, remain standing as well and can be easily seen from the road.