In 1737 Edmund Quincy was appointed to a commission to resolve the Massachusetts border with New Hampshire.  As part of that commission he traveled to London where he contract smallpox and died.  In return for his service his family was, in 1739, awarded 1,000 acres in what would become Lenox.

Other smaller grants in the northern part of Lenox:

• The Stevens Grant – 250 acres in 1756 for the support of the widow and children of Capt. Phineas Stevens. Capt. Stevens had, with 30 militia men, held off put to 700 French and Indians during King George’s War, at Fort Number 4 – the northernmost British outpost on the Connecticut River in modern day Charleston, NH, on the border with modern day Vermont.

• The Lawrence Grant – 353 acres granted in 1758 to compensate for land given to New Hampshire when the new border was drawn.

The fourth grant shown on the map below, the Hooker Grant, was a different situation. It wasn’t made until 1801 and seems to have been an adjustment of boundaries from Washington township. 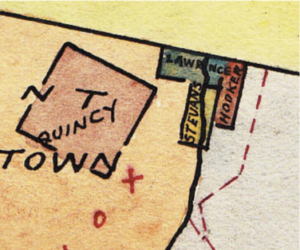 Some of the proprietors shown above would settle on the land they invested in and become major Lenox families including Dewey’s, Roots and Millers.  There are dozens of Dewey’s buried in the Church on the Hill Cemetery and the family remained a major presence in New Lenox well into the 20th century.