This 2-story, wood-framed farmhouse has a front gable, asphalt-shingled roof with three bays on the front facade. It is clad with wood clapboard, has corner boards and a water-table. There is a brick center chimney and a brick rear wall chimney. The house has symmetrically placed and recessed cross-gabled ells off both the right and left sides. A 2-story, hipped-roof, canted bay window projects from the left side ell, with paired windows on its outer wall on the first and second floors. Behind this ell is a glazed sunporch with a side entry; steps once provided access to it from the basement-level grade as evidenced by a pipe railing. The steps have been lost. The stone basement/foundation is exposed on the rear of the house; portions have been parged. The window trims have molded headers. The distinguishing feature of this dwelling, its 3-sided wrap-around porch that extended across the front and connected to both the side ells, has been removed. It had a hipped roof supported by eight turned posts and it had a geometric-designed railing. The left-hand portion of the porch had been glazed early on. The original 2-o-2 windows (evident on the 1994 survey photograph) have been replaced. Although simple in design, it reflects the architectural transition between Gothic Revival and Queen Anne styles. No outbuildings remain on the site, the driveway access is overgrown, and the rear yard has become something of a dumpsite. Seventeen years ago, when first surveyed, the house was viewed as being in “fair condition.” In 2012, it looks to be on the verge of being condemned and razed.

Home and workshop barn behind was built by Frank Parson who was a contractor/builder. Skip Parson, Frank’s son, continued the business. They built the Bradford Inn on Route 7 which was later called the Cardinal Inn (this property now is the site of the Quality Inn). Mabel Annie Parson and Mira Katherine Parson, the daughters of Skip Parson, lived in the house and kept accurate records of the Church on the Hill burial grounds which are used today and is the only record of births and deaths that Lenox has during their lifetime. In 1987 the structure was owned by a great grandchild of Frank Parson. It was owned by Pam Hicks in 1994 and acquired by Brian C. Hicks in 1995.

Town of Lenox Board of Assessors

Harvey M. Steurwald (Lenox Native), who knows the family and was employed by the Parsons as a carpenter for the contracting business.

This Federal period dwelling is wood framed, two stories tall and has a 5-bay, center entrance facade. There is a brick endwall chimney on each side. The house has a gable roof with decoratively incised verge board, a gabled rear dormer, and two small 4-light attic windows in each gable (on either side of the chimneys). The original house has wood clapboard siding. A front entrance porch, an early addition, has four chamfered pillars and two pilasters supporting a hipped roof, and a millwork railing. Originally two bays deep, the house has received several rear extensions, as evidenced by various surface treatments. The first addition was a 2-story, cross-gabled ell, three bays deep, constructed of brick with red mortar. The window lintels in this section are of stone. On its south side is a 2-bay-wide entrance porch with hipped roof, four chamfered pillars, and millwork railing incorporating incised banding below the balusters. A second extension, tacked onto the rear of the first rear ell is probably wood-framed with a brick veneer in a decorative Flemish bond pattern. This section has a hipped roof, a gabled wall dormer above the second floor window and wood corner boards. A tall chimney is located on its rear side. A set of five 8-light casement windows is on its side.

The house is accessed via an access point onto Pittsfield Rd; a long paved driveway, with adjacent parking area, runs along the north side of the house. A low stone retaining wall encircles a portion of the front yard.

Capt. Oliver Root, a blacksmith, was one of the early settlers who came to the Berkshires from Southington Conn. about 1778. He obtained the Lenox property in 1792. When he sold the property to Luke Gates in 1797, it consisted of a house, barn and blacksmith shop. Capt. Root had seven children and there are many descendants in Berkshire County.

At the Lenox Town meeting on 10/24/84 the Hashims were denied their request to change zoning of the residential parcel from residential to commercial. Their plan was to build town houses and turn the farmhouse into an inn and shopping area.

This Federal style building has two stories, an asphalt shingle roof and is intact. It has a five-bay center entrance; wood frame; hipped roof; and an octagonal cupola with a spire atop a tall square base. It has wood clapboard siding with a dentil band at the cornice. It has very light paneled corner boards, Palladian window on the second floor. The front façade is centered above the front entry with brackets below the sill and a dentiled cornice. The door surround has an entablature having metopes and triglyphs, and a gable above with modillions, fluted pilasters and 2/3rds-length 10-pane sidelights. There are intact 6-over-6 windows; authentic window blinds; and a large dressed stone foundation

On January 5, 1803, a group of twenty-five Lenox citizens petitioned the State Legislature to grant an incorporation to their group for the purpose of establishing an Academy. They were incorporated February 22, 1803 as “The Berkshire Academy,” the name being changed to the Lenox Academy in June of that year. The Academy flourished throughout the first half of the nineteenth century, and had a number of illustrious headmasters and students including John Hotchkiss, Josiah Lyman, Mark Hopkins and Charles Sedgwick. The Academy closed in 1866, serving as a public high school from 1869 until 1879. In 1879, under the direction of Judge Julius Rockwell, the building was moved to a new foundation and repaired, reopening the following year under principal Harlan H. Ballard. In 1886 the building was again put to use as a public high school, serving in that capacity until 1908. The Academy was incorporated as a private school, the Trinity School, in 1911 and remained in operation as such until the 1920’s.

After a period of vacancy and the threat of demolition, the decision was made at a special town meeting to preserve the building, and in 1947 the trustees of the Academy turned the building over to the town. Since that time it has served as office and meeting space for various public groups including the Girl Scouts, the Lenox Garden Club, the Chamber of Commerce, the Historical Society, the Chamber of Commerce, and the Lenox Historical Commission. 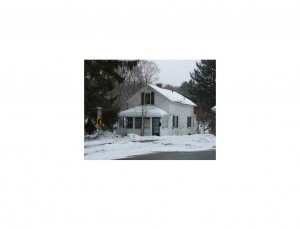 After many years of neglect, this typical village house was judged unsafe in 2010 and demolished despite being in the Lenox Historic District.  This demolition alters the look of the neighborhood and illustrates the challenges of preserving small houses that are not architecturally significant in themselves but contribute to the overall historic integrity of a neighborhood.

Matthew and Mary Colbert bought this property from Henry Cook in 1853, although the deed was lost or mislaid and the transaction was not recorded until 1857. This building is identified on the 1876 atlas as a shop, and may have been the blacksmith shop of Thomas Colbert, listed in the 1885 directory as a blacksmith and horseshoer. 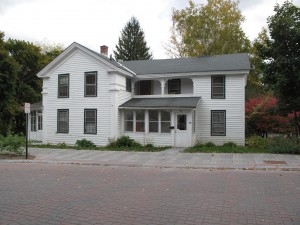 This Greek Revival/Gothic Revival style building has two stories, an asphalt shingle roof and is intact. The original part of the house has 2-bays, a wood frame, cross-gable and a brick center chimney. There is wood clapboard siding, corner pilasters and extra large entablatures on the sides. The right side obscured by a large recessed ell, and there is a glazed entry porch with a shed roof in front of ell. The recessed balcony on the second floor above has pillars and scroll sawn braces. The porch on the left side is also glazed (early), and the rear portion is enclosed with a hipped roof, chamfered pillars and scroll sawn/console braces. The 1.5-story rear ell has a brick chimney between it and the main house. The 1-story rear lean-to on the right side ell has some original 6-o-6 and 2-o-2 windows, and frieze windows on the left side.

This lot was originally part of the Henry Cook estate, which he developed and sold in the 1840’s and 50’s. This property was purchased by Matthew Colbert in 1853. The Colbert family also owned the house at 100 Church Street.

The structure is depicted on 1854 Clark Map and “Mrs. Colbert” on the 1876 Beers Map with a simple rectangular footprint. The current footprint is on the 1893 Sanborn Map.

In 1930 it was sold to Broderick and then in 1941 to Joseph and Selma Malmstrom. In 1949 it was sold to John and Mary O’Brien who ran greenhouses in Lenox called O’Brien’s Florist which was located on West Street.