Col. Richard T. Auchmuty (1831-1893),  architect and owner of the Dormers, had a distinguished heritage. His great grandfather was rector of New York’s Trinity Church in 1763.  He joined the Union army in 1862 and rose to the rank of Colonel.  He was often seen riding his horse, Mrs. Gaines around Lenox.

In Lenox Col. Auchmuty was chairman of the new Trinity Episcopal Church building committee, did much  of the design work, and contributed as much as $20,000 of the cost of the new church.

He built and then contributed a school in 1883. It was most likely in New Lenox as it was as of the mid 1930’s manuscript of George H. Tucker in the hands of Oscar Hutchinson.

His obituary also cited his work on the town’s water and sewer works, Memorial Day celebrations, dedication of the Patterson monument, and the design of the new town hall.

In New York he established, in 1881, the New York Trade Schools, after studying the trade systems in Europe.  According to the 1893 Century Association (thank you Cornelia Gilder)he contributed substantial amounts and his wife contributed to a foundation to permanently fund the school.  Trade unions boycotted the Trade School graduates so Auchmuty saw to it that they got jobs working for his architectural firm.

The lead paragraph of his New York Times 1893 obituary captures the love and respect he had generated in Lenox:

“LENOX, Mass., July 22. — The death of Col. Richard T. Auchmuty ia a great blow to Lenox. The cottagers were much shocked when they heard on Tuesday morning that he was dead. What he has done for Lenox cannot be told in a single paragraph. He was one of the pioneers, coming here in 1866, when he bought a large tract of territory on the Pittsfield road.” 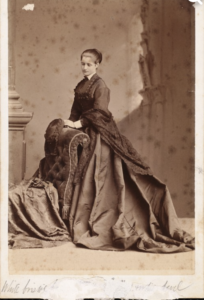 She too was from an old New York family and her mother was one of the earliest Lenox cottagers having built Pinecroft which stood between Walker and Kimball Street encompassing modern Schermerhorn Park, Pinecroft and substantial additional acreage.

To picture the bucolic surroundings of Ellen Schermerhorn Auchmuty’s youth, we have to imagine Lenox with no Route 7.

Adeline Schermerhorn remembered particular gratitude  for purchasing the second county courthouse in 1874  (now the Lenox Library) and donating it to the town.

Ellen must have been a charming reminder of a gentile past as the Cottager Era waned at the time of her death in 1927.  For most of her early life she traveled by special train from New York to Lenox where she stayed at Pinecroft from April to October.  She, with a major fortune of her own,  had been a major charitable donor to her husband’s work with trade education in New York, Trinity Church in Lenox and numerous other causes.

In her obituary it was noted that she had never ridden in a motor car, had no phone and no steam heat.  It further noted that she went for a weekly ride in her Victoria carriage with a team of horses, stayed sharp, and followed the stock market.