An excellent example of the immigrants who came to work on the estates – and whose descendants populate modern Lenox.

L.C. Peters, one of 10 children, left Kent, England in 1870, when he was 20, to look for work in the United States. His first stop was Troy, NY where he had family and became part of the work crew that came to Lenox to build Ethelwynd.   A skilled carpenter, he saved, and had, after four years, enough to bring over his fiancée, Martha Barnes and they raised three children to adulthood in Lenox.

He eventually bought the former Trinity Church on Church St.

He ran an antiques, fine furniture store in the Tudor Revival building he built on Walker.  Known as the Peters Block (Talbots today), it had an apartment above.

He moved what had been Williams Tavern at Triangle Park to old Stockbridge Road and enlarged the facility to be a rooming house for secretaries and others who worked on the estates. Today it is the Rookwood Inn. 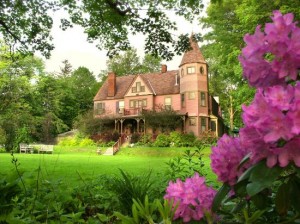 He had a barn (near current site of Haven). He was a founder of Lenox Savings Bank and had become a distinguished local citizen.

He died in 1928 and is buried at Church on the Hill with his wife, children and some of his grandchildren.