Serge Alexandrovich Koussevitzky was born July 26, 1874 to a poor Jewish family in what is now Tver Oblast Russia – about 155 miles northwest of Moscow. His parents were professional musicians who taught him violin, cello and piano. He was baptized at the age of 14 since Jews were not allowed to live in Moscow, and he had been awarded a scholarship to the Musico-Dramatic Institute of the Moscow Philharmonic Society. He became a successful bassist and married dancer Nadezhda Galat in 1902.

In 1909 he became a music publisher and gathered works of the greats of his time including: Sergei Prokofiev, Igor Stravinsky, and Rachmaninoff. He continued to conduct and perform as well.

In 1920 he left the then Soviet Union for posts in Paris and Berlin and in 1924 he left for the United States replacing Pierre Monteux as conductor of the Boston Symphony Orchestra. He was renowned for his recordings and concerts. He was a champion of new music and promising young musicians. Leonard Bernstein was a protégé.

Of course Koussevitzky is most loved locally for brining the Boston Symphony summer concerts to Tanglewood in 1936. 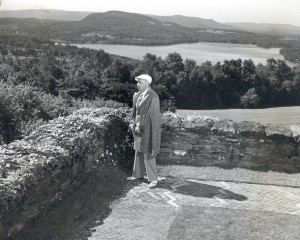 One thought on “Serge Koussevitzky”