Bellefontaine was built in 1896-1898 for Giraud and Jean Foster.  Giraud Foster (born in 1851) lived at Bellefontaine until his death in 1945 and could be considered to have watched over the sunset of Lenox’s Gilded Age.

The estate was sold in 1946 and burned in 1949.  The fire destroyed most of the interior but the shell remained and the mansion was rebuilt.  It has taken on a new life as a key part of Canyon Ranch.

Estate and Treasures Part of a Prototypical Gilded Age Life

Carrere & Hastings were the architects.

They designed the New York Public Library and the Newport home of Mrs. Foster’s sister, Anna Van Nest Gambrill.  In keeping with the recreational rhythm of the Gilded Age, the Fosters spent summers in Newport and Mrs. Gambrill (and others) spent fall in Lenox.  Of course there were trips in between to Palm Beach; Aiken, South Carolina; and the south of France.

The pillared rear entrance showed some obeisance to the Petit Trianon at Versailles and the interior was furnished in the manner of various Louis’s. 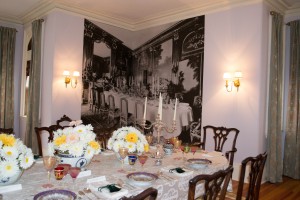 The landscape included statuary (most of which was subsequently destroyed by one of the religious orders that took over the building after Foster’s death), formal gardens and a large greenhouse complex.

A Life from Another Time

Although Giraud Foster’s fortune at the time Bellefontaine was constructed was attributed to coal, the Foster family had had a flourishing business in the clipper ship era (some of the tableware from China is in the Ventfort Hall exhibit). The Giraud name traced back to Huguenots who were among the earliest settlers of New York and Jean Van Nest Foster was from an old Dutch family with wealth and property of its own.

Jean Van Nest had suffered from rheumatic fever when she and Giraud met so they delayed marriage until he was 43, she 32.  The birth of their one child more than ten years later was a surprise.  The younger Giraud, known as “Boy” when young,  was Jane Foster’s father.   Jean predeceased Giraud in 1932.

Giraud continued to live a life Downtown Abbey fans would appreciate as a horseman, regular attendee at Trinity Church, and head of the Lenox Club and Mahkeenac Boating Club.  He was an avid bridge player and was famed for his birthday parties.