The area now occupied by the Village Shopping Center included, before the fire, the wooden buildings shown here.  They housed Clifford & Sons which stocked the turpentine, paints and oils thought to be the source of the fire.

Fire Burned From Main to Church

The fire burned all the way back to Church St. and destroyed the Clifford building shown above, the Bull buildings and the residences of Joseph Gilbert, and Mrs. Rose Colbert and some smaller structures. 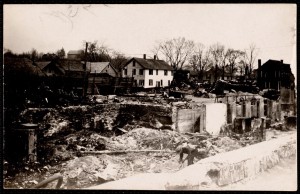 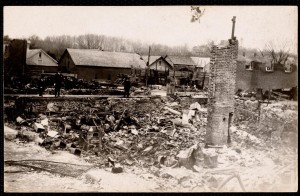 Here’s an excerpt from the April 12 special to the New York Times:

Six persons were killed in the fire which almost wiped out the business section of Lenox early this morning. Four business blocks and two dwellings were destroyed. The property loss is estimated at $250,000, with insurance of $111,000. New Yorkers who were at the Curtis Hotel on an Easter visit helped persons driven from their homes.

The six persons who were killed were asleep in the Clifford Building, a three-story structure, when the fire started.

Mrs. Catherine Root and her sons, George and Arthur, were badly burned in escaping from the building.

The fire is supposed to have started from spontaneous combustion in the stock of James Clifford & Sons Company, hardware dealers. They had turpentine, paints, oils, and dynamite stored in the basement.

George Root, who lived in the upper story of the Clifford Block, was awakened shortly after 1 o’clock this morning by smoke that rolled into his room from a partly covered chimney hole. He called his brother and mother, and they ran down the front stairs in their night clothes, shouting to the other occupants of the upper floors as they went. They found the front door in flames, but the men wrenched it open and they dashed through.

The Roots had barely crossed the street before there was a traffic explosion in the building behind them, and in an instant the Clifford block was all aflame. This explosion was heard for a distance of six miles, shattered windows within a wide radius and caused the fire alarm to ring.

Horace Perrill and his wife, other occupants of the top floor, aroused by the shouts of the Roots, had got half way down the front stairs when they saw the flames leaping up to bar their exit. Three women were below them, trying to get out through the front door, but Perrill saw that the attempt was useless. He rushed his wife through a long corridor to the back stairs, and got out in safety.

All the other occupants of the Clifford Block lost their lives. While the fire was at its height a woman was seen to climb out of a flame filled room to a veranda on the second story with her night clothing and hair ablaze. Staggering to the railing, she leaped to the sidewalk, landing in a heap within a few feet of the blazing walls. Some of the onlookers tried to rush in to drag her out, but the intense heat drove them back, and it was hours later before the body, that of Miss Alice French, was recovered. The bodies of the other victims are probably in the cellar of the block, but they cannot be reached until some time to-morrow.

Within ten minutes of the explosion the flames were licking up the Eddy Building on the south. In this block the people had been almost hurled out of their beds by the explosion, and they lost no time in making their way to the street in their night clothes. The night air was cold, the temperature being about 20 above zero.

Lenox has only a small volunteer Fire Department, and until aid came from Pittsfield, Richmond, and Lee the flames spread rapidly. The Clifford, Eddy, Mahanna, and Bull buildings, the residences of Joseph Gilbert and Mrs. Rose Colbert, and some smaller structures were destroyed. Only a shift of the wind from northwest to southwest saved the Public Library and the Curtis Hotel. Seven of the large elm trees, which are the pride of the Lenox Main Street, were so badly damaged that they will have to be cut down.

Many prominent New York and Boston society people were at the Curtis Hotel over Easter. When the explosion was heard many of the hotel party thought that burglars were at work in the Lenox National Bank, across the street. The sudden glare and crackle of the flames, however, aroused them speedily and they hurried to the scene, where they at once took in charge the shivering people 20 degrees above zero, were watching the destruction of their property. The sufferers were taken to the hotel, where warm clothes and every care were given to them.

A proposition was made to-night to raise a fund of $10,000 among the New York Summer residents of Lenox for the fire sufferers. All the villa owners will be asked to subscribe to the fund. A committee will meet in New York to-morrow morning to take up the matter. Easter guests at Curtis Hotel may further assist by a benefit entertainment.

Valuable plans for work on the Robert W. Paterson place, the new Lenox High School, and other villas which the Cliffords had under way were burned, and nothing can be done until new plans have been prepared, and many men will be thrown out of work. It is expected that temporary buildings will be put up by storekeepers. Without these shops villa owners would be compelled to purchase in Pittsfield, Lee, and other towns.

At the time, most of Franklin Street was taken up by the Tillotson livery complex.  The horses were released and ran for miles.  It took days to recapture them all.

There had been discussion of a Lenox Fire Department but nothing had been done.  After the fire a department was quickly formed and a Fire Truck purchased.