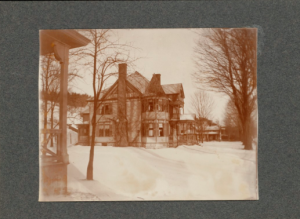 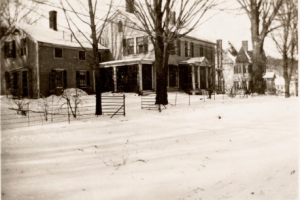 In 1902 General Thomas H Hubbard built the elegant Aspinwall Hotel in what is now Kennedy Park (Woolsey Woods).  It had

Hillside was built by Mrs. Hartman (Grace) Kuhn of Boston in 1870, and used by her during the ‘season’.

Mrs. Kuhn, who also purchased Butternut Cottage, owned the entire lot along Main St. from Greenwood to the Kingsland House (at the junction of Main and Cliffwood Streets). By 1890 the house was being rented

to Mrs. Cruger of New York, and around 1911 it was sold to Mr. and Mrs. Ross Whistler, who renamed it Hidden House. Mr. Whistler, who had made his fortune in railroads, was a nephew of the famous painter and brother of Joseph of Plumstead on Old Stockbridge Road.

The original portion of the structure (corner of Hubbard and Main) was the home of Israel Dewey, one of Lenox’s earliest settlers. Dewey, who established a home in the area by 1764, was one of the proprietors of Lenox and served in a number of public positions. Like many Berkshire householders, Dewey was licensed as an innkeeper. He left Lenox for Vermont in the early 1790’s, and after several changes in ownership the property was acquired by Zadock Hubbard in 1798. He enlarged the house and opened it as the Hubbard Tavern. In 1806 the building was sold to Azariah Egleston, a locally prominent man, and converted back to a private residence. The house was substantially enlarged and altered after Mary Loring bought it in 1868. In 1885 it was sold to Mr. and Mrs. Richard S. Dana of New York and was remodeled for use as a summer home.  Currently it is operated as Birchwood Inn.

as she is listed in the 1885 directory as having a house and lot on Main Street.

In 1905, the house was sold to Caroline Katherine Carey (Miss Kate Carey), who moved the front portion of the house to its present location, adding on an extensive wing containing servants’ quarters and a storeroom, and apparently remodeling the entire

house. Miss Carey used part of the first floor servants’ wing as a carpentry shop, where she built doll and bird houses. Upon her death in 1945, the property was deeded to Trinity Church, who in turn sold it to Joseph Reynolds. In 1951, it was sold again,  renamed Garden Gables and opened it as an Inn and gift shop.

This charming Queen Anne style home stands on the site of the original Congregational parsonage, a brick building dating from 1852. By the 1890’s it had fallen into disrepair and the congregation elected to build a new house on the same site.  It is included in this description of Lenox as a Gilded Age resort only because it reflects the way the prosperity of the time spread out to effect the lifestyle of even the humble Congregational minister.  According to a turn-of-the-century magazine article, “Few Congregational Churches in Massachusetts have so fine a home for their ministers”.

This house was used as a parsonage until 1925, when the Congregational Church was given the Worthington House on Cliffwood Street which became the home of the minister.

Andrew Thompson purchased this lot in 1836, and built this house. In 1850 Horatio Sears purchased the property and resided in the house until his death in 1861.  It changed hands several times.  When it was purchased in 1872 by Andrew and Harriet Servin it was completely remodeled.   Around 1900 it was purchased by B.K. Stevens, who named in Sunnyhome (also “Sunnyholm”).   It has been, most recently, a therapeutic facility.

This house was built on the site of an earlier house demolished in the late 1870’s. The lot was purchased from the owner of that house, Lucy Cottrell by Electa Eddy in 1880. In 1886, it was sold to John Egmont

Schermerhorn. Mr. Schermerhorn named the house “The Lanai”, perhaps referring to its original porches.    It is currently operated as the White House Inn.

The original temple front structure, which forms the core of the present building, was probably designed as a counterpart to the Second County Courthouse of 1816 (now the Lenox Library).

This corner has been the sight of an inn of some sort since at least 1773 when the tavern standing here served as a stop on the stagecoach route from Hudson, N.Y. to Pittsfield. Traffic in the town increased after Lenox was made the county seat in 1784.

From about 1793 the Berkshire Coffee House operated on this site, and became famous as the gathering spot for people conducting business at the county Courthouse (then located across the street on the present site of Town Hall).

The hotel was purchased by William O.Curtis in 1853, and has been known as the Curtis Hotel ever since. The Curtis family was responsible for much of the hotel’s ensuing success, and William O. Curtis and his son, William D. Curtis, were active members of the community. The loss of the County Court in 1868 had little impact on business at the Curtis, which by this time was catering to a growing number of seasonal visitors. Beginning in the mid-nineteenth century, and accelerating rapidly after the Civil War, a stream of visitors came from New York, Boston, and other cities to experience the healthful climate, take in the views from its veranda, and join in the social activities that took place there.

Many guests returned year after year: some, desiring more space and privacy than the hotel rooms afforded, rented houses on Main and Walker Streets, also owned by the Curtis’s. These became known as “Curtis Cottages” and their occupants as “cottagers”; this has been cited as the origin of the term “cottagers” to describe wealthy summer residents in Berkshire. By the final decade of the 19th Century the Curtis served as overflow housing for owners of large estates, or was used by the estate-owners themselves before and after the “season” when their homes were not fully staffed. The building was greatly enlarged in 1883 and again in 1898 to accommodate these patrons.